Robin Bell Books
The Road To The Hermitage
Preview

Here is the Introduction to my book "The Road To The Hermitage."

I was born in a small village on the East Coast of England in February 1947, during one of the coldest winters in memory. Village life in Suffolk suited me, surrounded by woods and meadows to explore and I spent a great deal of my spare time during summer school holidays working on the local farm helping out with the harvesting, milking and generally making myself useful for a few shillings a week.

After my secondary school experiences I moved to London to begin a student apprenticeship with Ford Motor Company where I became less than entranced by diverse engineering topics such as Hooke's Law and the laminar flow theory of fluids in pipes. I managed to survive five years of this excitement before calling a halt, a decision which I think was welcomed by Ford Motor Company as much as myself.

Faced with material problems such as rent payments and the need to eat, I found myself a job with an insurance company, Phoenix Assurance, and became a trainee underwriting clerk. Talk about going from the sublime to the ridiculous! Thankfully I was saved from a lifetime of fire and accident insurance underwriting rules when I was selected to take part in an office systems training course, conducted by a firm of consultants with the lovely name of Booz-Allen and Hamilton. With a name like that, who could resist?

Six months of intensive training and I was released on the unsuspecting branch offices of Phoenix, armed with a stop watch and my copy of the Booz-Allen and Hamilton standard time measurements. A manual that is still in my possession, I hasten to add. By recording the actions of staff completing various forms, filing documents and so on, we were able to calculate, among other tasks, the standard time to write a letter, stuff it in an envelope and walk to the out-tray. Thus enriched, we could calculate the efficiency of each branch office and make recommendations on changes in procedures to improve efficiency. If the out-tray was two paces closer, then there could be a total time saving of almost 7 minutes and 43 seconds a month.

To relieve the boredom of office life, my fellow organisation and methods analysts (such was our exalted title) would take ourselves to the local pub on the Strand in London most evenings. This fabled pub, called The Surrey, was the home to most of the ex-patriot Australians living in London and on a good night closely resembled what I imagine to be Bazza Mackenzie's living room. Sadly this lively hot-spot closed down and it was on the closing night that I returned to my rented flat with a souvenired glass from the Surrey and the telephone number of an Australian girl.

One thing led to another and within a few months I had taken the decision to accompany the girl to Australia on her return where we would be married. It just happened that the Australian office of Phoenix Assurance was about to set up a new organisation and methods department in their Sydney office, so I was invited to become a founder member of this auspicious new section on my arrival in Sydney.

Over the next few years working with Phoenix Australia I was lucky enough to travel to all States in Australia on branch visits and I gradually became under the spell of that unusual country. Apart from these branch visits I also explored Central Australia in my motorised campervan home, converted from an ex-Government Ford Transit 'bus. 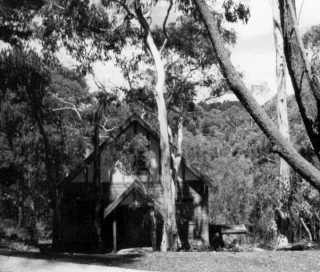 Illustration 1 My Cottage in the Blue Mountains

Changes in my personal life situation resulting from a divorce from my Australian wife in 1988 resulted with my purchase of a small cottage in Blackheath in the Blue Mountains of New South Wales. Situated close to Govett's Leap, Bridal Veil Falls and Pulpit Rock, this cottage was an ideal base from which to explore the many walking tracks in the Blue Mountains, an activity that I followed regularly most weekends.

However, the proximity to such beautiful natural wonders impressed not only me. On weekends the bush was overrun with hordes of tourists. All too soon my quiet retreat on a gravel road on the edge of the National Park had been invaded by tourists, the road covered with bitumen and the empty blocks of land on either side of my small parcel of paradise cleared and made ready for building. When a new house was built very close beside my house in Blackheath and the new residents moved in, complete with two small, very noisy dogs I started to think longingly about self-sufficiency and solitude. 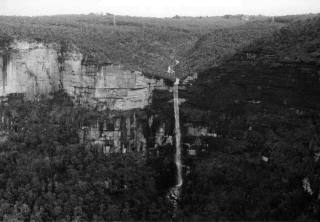 I had been living in Blackheath for a couple of years, firstly with my then girlfriend and for the last year or so with just my dog Wal and we had enjoyed the lifestyle. Being able to work from home was a big bonus, of course, as I had no need to take the daily commuter train trip of 2 hours each way into Sydney for work. On the few occasions when I needed to go into the city for work or meetings, I could drive in as I was usually going to be late leaving the city and did not want to be dependent on quite often late running or cancelled train services.

Now, though, the peace and quiet of small village life was being eroded by tourists and in particular new houses springing up all along my previously secluded, tree lined street. It was time to make a decision that would drastically change my lifestyle.

Top of the page